Toray Graphics in the Czech Republic, a leading manufacturer of waterless offset plate technology, has reported that ICP-ROTO Industry Graphic, a commercial printer located in Le Port, Island of La Réunion in the Indian Ocean east of Madagascar, has completely reconfigured its production operation from conventional coldset web to waterless offset.

ICP-ROTO had been using conventional coldset web offset for its newspaper work. The company had two objectives as it looked toward the future. First, as a highly environmentally-focused organisation, ICP-ROTO was looking to reduce its impact on its island and the planet as a whole. As a French territory, all waste is shipped to France for disposal, a costly and time-consuming process. ICP-ROTO wanted to reduce paper and chemical waste, and eliminate emissions such as VOCs and ink mist. The second objective was to find a solution that would allow production of higher quality commercial printing products in order to grow revenues and expand its customer base.

The new configuration features a Koenig & Bauer Cortina coldset web offset press with a heatset drying system running Toray IMPRIMA waterless plates. With its new configuration, ICP-ROTO has not only met its environmental goals, but it has also been able to significantly expand its product line. ‘We can now deliver high quality commercial printing, in addition to our core newspaper printing,’ said Philippe van Damme, ICP-ROTO’s Chief Technology Officer. ‘We did some of that printing in the past, but were unable to deliver the kind of quality that stimulates growth. Now we are not only serving more needs of existing customers, but we are well-positioned to acquire new ones.’

The company benefited from a French government grant to enable them to make the investment, from which they expect a payback of about one year. This is due to expected revenue increases, reduced waste, and other reduced costs including the cost of shipping waste to France. An added benefit is reduced water consumption. ‘I’m delighted with waterless printing,’ van Damme added. ‘It’s great quality and environmentally friendly. The new configuration is setting us on a good path to the future.’

‘It was exciting to work with ICP-ROTO on this project,’ said Toray Technical & Sales Consultant Hans-Joachim Koch. ‘It has made a huge difference in their business and is benefiting the environmental health of the island. One other important element of this installation, especially in light of the remoteness of Reunion Island, is to be sure to have plenty of back-up on site. There is a large parts depot on site for the Cortina press and other equipment. In addition, should an issue occur with the waterless platesetter, we have reconfigured an older conventional platesetter to waterless so there will be no interruption in platemaking.’

In addition to increased commercial printing business, ICP-ROTO began printing two French newspapers on the island in 2018. “Because of our increased capacity and quality, we are now able to print Le Figaro and Le Monde locally,’ van Damme stated. ‘This is terrific for our citizens, because now they will be able to get their newspapers from France in the same day, instead of waiting for them to arrive two to three days after production in France. Plus, it is another environmental benefit, eliminating the CO2 footprint associated with shipping all of those newspapers. We are extremely excited about our new waterless future!’

For more information, and to download the full story, please visit our web site: www.imprima.toray

Captions:
ICP ROTO:Side entrance of the building of ICP-ROTO Industry Graphic, a commercial printer located in Le Port, Island of La Réunion in the Indian Ocean east of Madagascar.

Press under construction:Side of the new extension is still open for an easy access during installation of the press machine.

ICP ROTO sign:Logo sign on the highest top of the company building to be seen from the highway. 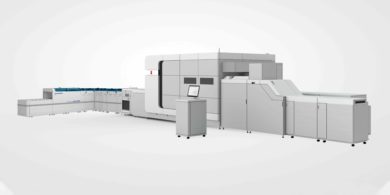