Ricoh SA has launched an advertising campaign based on political jockeying in the run up to elections 2014 that asks people to imagine. change. The campaign features caricatures of Julius Malema and Helen Zille happily embracing. ‘The printer, copier, fax, scanner market is a parity market,’ said Kevin Kleynhans, executive creative director at Ricoh SA’s advertising agency, Global Mouse. ‘We are not launching managed document services (MDS), we are launching imagine. change. We must be controversial, we must make people think, we must zig where everyone else is zagging.’ The campaign consists of radio, outdoor billboards and print national press. It kicked off with billboards on April 7 in eight locations along the R24 and N1 freeways, next to the N4 in Cape Town, then back in Johannesburg there are two in Sandown, more in Bryanston and another in Rivonia. ‘The campaign that Global Mouse proposed and the one we sanctioned is highly topical at the moment and often highly emotionally charged,’ said Esti Kilian, national head of marketing services at Ricoh SA. ‘This campaign invites people to imagine a world of possibility and opportunity in a lighter spirit that takes the edge off the political manoeuvrings of two of South Africa’s most prominent opposition leaders. Let’s face it – at times even the most hardened politically aware citizen can find the deluge to be a bit much.’ She admits that the campaign could draw some negative responses, and undoubtedly will from isolated quarters, but it is supposed to deliver an element of fun that the majority of South Africans should appreciate. Kleynhans said the concept leads people to ‘imagine if’, which is usually followed by positive images of progress and development, moving forwards instead of backwards. That, said Kilian, is the essence of Ricoh and what it does for its customers. ‘Imagine if there were no wars, no corruption, no hunger – in fact, John Lennon’s song asked those questions and became one of the most loved in history,’ said Kleynhans. ‘The word change frightens many people, but it also makes them sit up and take notice and, in the end, excites most people because it is highly evocative.’ ‘Ricoh’s values include: “Love your neighbour, love your work, love your country”,” which originated more than 50 years ago with our founder, Kiyoshi Ichimura. That’s what our company stands for,’ said Kilian. ‘People like to know that the business they support has evolved ethical and moral standards, that it considers the environment in which it operates, the communities that are the core of our society, the people at grassroots level who only want the best for their country.’ ‘We think people, upon seeing our work, will automatically imagine scenarios of their own. We think it is incredibly campaign-able and has a long shelf life. We think it will be noticed and cause comment, debate and interest. And that, at the end of the day, is what we want to achieve, so the next time Ricoh knocks at someone’s door and says are you interested in a managed document solution, the potential customer says ‘Oh, you’re the Imagine. Change. Guys,’ said Kleynhans. ‘Sure, come and show me what you’ve got.’

Technology catches up with imagination at FESPA 2015 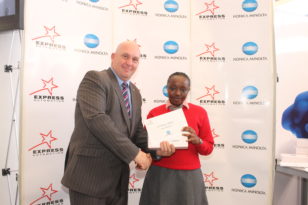 Creative writing and drawing contest: Konica Minolta inspires young Kenyans to give shape to their ideas

The Rise and Rise of Flexo