Print Finishing has, for many years, been the term used to describe all post-print processes required to take a printed job from the flat printed sheet to the end-product. For the most part, it referred to processes such as stitching, folding, binding, trimming, book blocking and the like. Even when new finishing processes such as thread sealing were developed, they were generally an extension of existing finishing processes. In recent years there has been a change in the functional definition of print finishing. There are a number of factors which have caused this change. More than changing, it has expanded to include more post-print functions. This is due to the fact that there are physically more post-print functions which can be considered to be finishing rather than merely the assembly of the final product. The inference that finishing refers to the final step in the production process is now gone. Finishing now refers to a plethora of processes and functions which can be performed on the printed sheet. Some of these processes can take place long before the final job is assembled. Processes such as foiling, spot varnishing, the application of scratch ‘n sniff, laser cutting or engraving, and many more. In part, the development of this expansion of the definition of finishing has come from the fact that the saddle stitchers and perfect binders have evolved. The use of intelligent automation and optical recognition systems has meant that some of these elements can be incorporated in the finished job without putting undue strain on the set-up aspect of the finishing process. This has meant that printers have actually been able to consider including more unusual applications in their production portfolios. Another factor which has influenced the change was the increasing prevalence and technical capability of digital printing systems. This meant that much more was able to be achieved during the print run than would previously have been considered possible. To a large extent, digital printing was the driving force and resulted in the creation of inline finishing systems from many of the major post-press equipment manufacturers. In some cases it resulted in small adjustments to existing systems and in others it brought about the creation of entirely new systems. Such has been the influence of digital printing, especially with some of the more recent developments such as metallic inks and spot varnishing that the job is often ‘finished’ as soon as it exits the press or printer. This obviously depends on the type of job being printed but these elements are often considered to be finishing steps. What is required, is possibly the creation of a new definition or a redefinition of print finishing. It might require that two separate words be used to define the different aspects of what has been lumped together under the term finishing. Finishing could be used as the term to describe all processes where printed jobs are finally assembled. This would address such things as saddle stitching, perfect binding, book blocking, thread sealing and thread sewing. It would also cover such processes as inline booklet making, folding machines, gluing machines and all other processes involved with the final stages of production, whether conventional or digital. All other processes could possibly be covered by the term post press or post print as this is a more accurate description of the chain of production. Using one of these terms will also assist with differentiating all the technologies which have been amassed under the term finishing equipment or consumables. This will allow for a better and clearer understanding of all the different and sometimes disparate stages of production. 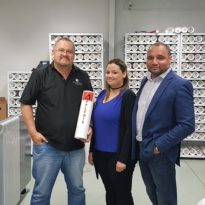 Heltronic and HPM At the cutting edge