The powerful sense of touch is what we have missed the most during the pandemic, according to an article published in The Guardian at the end of February this year. It is a universal language that allows us to connect in different ways.

The role it plays in our interaction with the world is something of importance, when considering how paper choice can generate a reaction and encourage a sense of ownership. But it is not just paper that can engage the sense of touch. Coatings can add another haptic dimension and the resultant increase in interaction can be highly influential in buying decisions.

This is something Joann Peck, associate professor of marketing at the Wisconsin School of Business, found during her research into sensory marketing. She reported touch in consumer behaviour was not only relevant when it could directly provide information on product attributes, such as soft tissue or ripe fruit, but the act itself of touching has the potential to influence people’s views and behaviours. People were also more likely to buy something just because they touched it.

Peck found that texture can influence people’s willingness to donate their time or money, too. In one study her research team created brochures for a children’s museum. A version included a soft, fuzzy circle as part of the design and those who had received the tactile element were significantly more likely to say they would donate time or money.

In a pamphlet for an arboretum headed “Get back in touch with nature” a textured feature such as a feather, tree bark, or sandpaper was added. Others had no texture, or textures that did not relate at all to nature-oriented messaging. Recipients of the textured version were more likely to express an interest in donating. The results were higher where the texture was more relevant to trees and/or nature.

Another experiment involved a fictional charity called Spread the Warmth that provided blankets for those in need. Participants who received a pamphlet with a swatch of fleece fabric were more likely to donate.

Peck adds brands are missing a huge opportunity to differentiate with texture – particularly packaging. She says if it’s apparent that a product or label has an interesting texture it will compel some people to pick it up simply for the experience of it.

This was further explored by Aradhna Krishna’s Sensory Aspects of Package Design research that reports a new and peculiar texture should attract more attention, invite more people to touch the object, and, if enjoyed, generate a higher haptic engagement.

Charles Spence says an interesting, and often distinctive, tactile feature, one that encourages the consumer to touch and/or pick up the product, will increase the likelihood of purchase.

We have five basic senses. Print can be preoccupied with sight at the expense of touch. Yet touch is extraordinarily potent. Can you feel it? 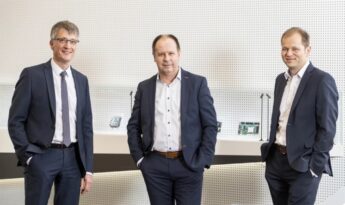 SCANLAB positions itself for further growth