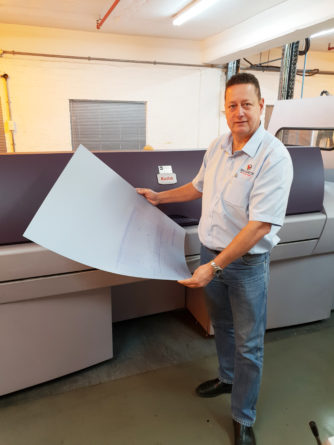 In partnership with Kalideck, Kodak launched the first commercially successful process free plate in the mid-2000’s. The KODAK THERMAL Direct non-process plate, which eventually led to over 2000 printers globally utilising these plates in their daily production on sheetfed, heatset and coldset presses.

Kodak raised the bar in 2012, when they introduced the next generation of plates, which made process free plates a reality for even more printers. The KODAK SONORA XP Process Free Plate, designed for commercial and offset packaging applications, and KODAK SONORA News Process Free Plate, which was specifically designed for newspaper applications. Both products took process free platemaking to a new level.

Their innovation didn’t end there.  In 2018, Kodak made another ground-breaking breakthrough with the KODAK SONORA X Plate, which enabled up to 80% of all offset printers to convert to process free plates.

With there being a heightened focus on sustainability and going green, across all industries worldwide, Kodak have done it yet again, through introducing the KODAK SONORA XTRA Process Free Plate, which ticks all of the boxes especially when it comes to the environment and cost savings. SONORA XTRA makes process free an attractive option for even more printers in search of a plate that can reduce costs in both prepress and the pressroom without compromising print quality or productivity.

The visible image contrast on SONORA X Process Free Plates was a barrier to some new adopters of the technology. Kodak took the feedback that it received to heart, which is why the image contrast is enhanced with SONORA XTRA plates, where it is three times stronger and comes close to that of processed plates – it is easy to see even the smallest image details on the plate.

Regardless of whether repeat work needs to be done a couple of months or years down the line, the plate will be identical to the original. With the finished job being the same as the previous print run, it makes repeatability much easier.

Increase in sustainability/Reduction in costs

By eliminating the need for chemicals, water and electricity from processing, SONORA XTRA Plates will help you reduce environmental waste, meet regulatory standards, appeal to customers concerned about sustainability – while saving you money.

– SONORA XTRA Process Free Plates eliminate the need for water to be used in prepress, where on average a processor uses 10-15 litres of water per plate. Additionally, there isn’t any need for water to mix concentrated chemistry, dilute your finishing gum and to clean the plate processor or clean-out unit.

– With SONORA XTRA Process Free Plates eliminating the need to process and bake plates, there is a dramatic reduction in energy consumption, which is fantastic for the environment as well as your bottom line.

– Despite chemistry being harsh on the environment, some companies still dispose it down the drain, oftentimes because a recycling company can charge up to three times the cost of purchase, to remove it. SONORA XTRA Process Free Plates take away the need to purchase and dispose of chemistry, saving you money and protecting the environment.

‘Kalideck have placed our first order of KODAK SONORA XTRA Process Free Plates from Kodak and expect them to arrive in South Africa in August. We received some plates from Kodak for trials, which were run at more than 8 sites,’ said Guenther Naubereit, National Product Manager – Plate & Press at Kalideck. ‘The first thing they noticed was the improvement in contrast. Customers in continuous feed, which entails punching and bending, were impressed by the camera picking up the tick marks on the plate,’ he continued.

‘With all of the additional benefits that Sonora XTRA Process Free Plates are able to bring to your business, you shouldn’t be asking the question “Why should I make the change?” but rather, “When?”’ Contact your local Kalideck representative or Regional office to reserve your plates now.

Kodak and Sonora are trademarks of Eastman Kodak Company.