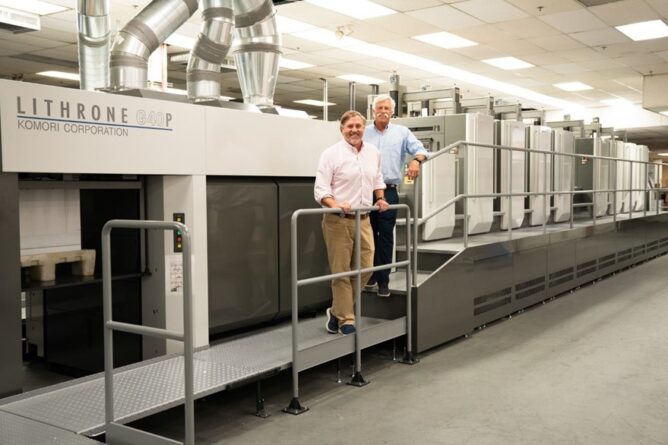 Atlanta-based printer Tucker Castleberry has been knocking it out of the park since partnering with Baldwin Technology’s AMS Spectral UV to provide LED-UV curing technology to retrofit its sheetfed press last year and upgrade its new Komori GL840 Perfector this year. The printer has been a corporate partner of the Atlanta Braves since 1979, and these upgrades proved more crucial than the business could have predicted in many ways, including for its time-critical turnaround of 2 million programmes for the baseball team in the lead up to its recent World Series win.

Tucker Castleberry is a third-generation, family-owned commercial printing and communications company. It was started in 1949 by Wiley Tucker Sr. and A.C. Castleberry as a small letterpress printer and is now run by Wiley’s son, Tuck, along with Tuck’s son, Kent.

‘We don’t get the copy for the next day’s baseball programs until late in the afternoon, so the printing, trimming, folding and stitching all has to be done during the night,’ said Tuck. ‘With LED-UV, inks dry immediately with no wait, which is a game-changer. We knew this season on a Wednesday at midnight that the Braves were going to the National League Championship Series, and we had 36 hours to print 50 000 programmes for each of the three home games. Printing both sides of the sheet in one pass on our Komori LED-UV eight-colour perfecting press made 30 000 impressions possible.’

Tucker Castleberry also printed a World Series poster as a giveaway to the first 10 000 fans, and worked with USA Marketing and Major League Baseball to produce signs held up by 40 000 fans for the “Stand Up To Cancer” tribute during Game 4 of the World Series.

Record Run
The printer first put LED-UV to the test when it fulfilled political mailer demands for Georgia’s 2021 US Senate runoff elections. For Tucker Castleberry, this meant a record print run of 100 million pieces—double its usual voting season workload—which were produced from August 2020 through January 2021. Its largest single job during that span was 1.5 million pieces. The company has union pressmen and a union bindery, along with a contract to print the union bug, which makes it a choice printer for political jobs.

‘We had one weekend off in five months,’ Kent recalled. ‘We were able to take a load off the delivery and take pieces directly to the cutter, which is a huge benefit with LED-UV. It helps us with throughput, and we do not have to worry about marking as it goes through the folder. Also, the print quality is better: The inks are brighter and pop more, on uncoated paper especially, with a lot less dot gain.’

Steady Progression
When the printer moved into its current location in 1995, it purchased two Manroland six-colour, 40-inch sheetfed presses with aqueous coaters that print at speeds up to 16 000 sheets per hour (with computer-assist keeping colour consistency at a near-perfect level), two POLAR computerised cutting systems, several MBO folders and a six-station saddle binder, all working in unison to maximise consistency and efficiency. By 2000, the mailing side of its business was growing exponentially, so Tucker Castleberry added inkjet and inserting equipment, plus banding machines, to support direct mail and keep up with increased demand, maximise efficiency and deliver an unmatched product to its customers.

LED-UV Leap
In January 2020, after shopping extensively for a new press to speed throughput and job turnarounds, the Tuckers instead were inspired to follow the lead of a fellow printer that had exceptional results retrofitting an existing press with LED-UV. They also were interested in the technology’s ability to provide enhanced quality, substrate options, market opportunities, special effects and more.

‘When we first started shopping, there were so many options and different configurations. We wanted a single-lamp system at the end of the press, something that could cure ink and coating in one pass, and not have to worry about it, and it has worked very well for us,’ Kent said. ‘We ran aqueous coating on probably 95% of all of our work before installing LED. The print quality with LED is significantly sharper and provides the same gloss effect as an aqueous. It’s been a homerun for us, for sure.’

Baldwin technicians retrofitted the Roland 700 press during the day for four days, and the printer ran its jobs at night. A week of training immediately followed the installation.

‘We had experts from Baldwin onsite who were able to talk to our sales team, ownership and pressmen, and help us all through all kinds of techniques,’ Kent recalled.

Instant Results
Tucker Castleberry gained immediate efficiency by running its sheetfed press 30% to 40% faster, and even 50% faster in some cases, because LED-UV cures inks instantly and eliminates the concern of marking in the delivery. Press speeds that previously averaged 10 000 to 11 000 sheets an hour were immediately ramped up to 14 000 or 15 000 an hour.

‘The press is rated for 16 000, so it doesn’t really run faster than that, but we had one job where it was at 16,100, which I’m not sure how we got there,’ Kent said. ‘The feeder has to be set up, so it’s not tripping out every 10 minutes, or else you’re going to lose productivity there, but if everything is set up properly, then the ink curing and marking is not a concern.’

Another LED-UV advantage, according to the printer, is less dot gain with more vibrant results because the ink “sits up on the sheet” and doesn’t soak in as it does during conventional printing.

‘This is especially true on more porous, non-enamel sheets. We can print on any substrate that will feed through our press, including plastics, PVC materials and foil,’ Tuck commented. ‘And, jobs can be worked in the bindery the second they come off the press.’

Atlanta’s heat and humidity posed extra challenges prior to LED-UV, and those have vanished. ‘Years ago, we printed a flysheet for a high-end resort, and we fanned it out every day, a couple times a day, and it just never dried,’ Kent said. ‘With LED-UV, we did a commencement catalogue for a local college a couple months ago, and we didn’t have any issues. It was dry the second it hit the delivery, and then went straight to the bindery. The benefits are just really endless.’

Perfector Advantage
Tucker Castleberry’s new Komori GL840 equipped with LED-UV has helped the printer raise the bar even higher and capture more opportunities since its installation earlier this year.

‘Going from a traditional 40-inch straight six-colour press to an eight-colour perfecting press has boosted production in our pressroom,’ Tuck said. ‘We are able to print up to 15 000 sheets an hour, printing on both sides of the sheet in one pass. That equates to 30 000 impressions an hour.’

‘It is not unusual to make-ready both sides on the sheet in 10 to 12 minutes using less than 150 waste sheets,’ Tuck said. ‘The press actually learns! It takes into consideration the temperature and humidity in the pressroom and adjusts itself accordingly to keep colours consistent throughout the run.’

And, finally, there are cameras on the press at key points, so the operator can watch the press sheets run through the press on a 50-inch monitor.

Equipped with its new Komori GL840 Perfector and the proven game-changing power of LED-UV technology, Tucker Castleberry has entered 2022 with a steadfast commitment to embrace the ever-evolving and most challenging print demands that come its way.

Look after your pregnant employees