Five members of staff from Océ South Africa had their years of commitment recognised when they received a commemorative long service award recently. The ceremonies, which were attended by fellow employees and the management team from Océ South Africa, were held at Hennops River in Pretoria, Pines Resort in Krugersdorp, and McPherson’s in Table View, Cape Town. All five members of the Océ South Africa team were presented with their long service awards by managing director, Dave Clark. Winfried Walzl, senior field engineer, was commended for his 30 years of service; technical area manager, André Engelbrecht, for his 25 years of service; training manager and national support, Percival Mchunu, and Wayne Scott, for their respective 20 years of service; whilst storeman, Goitsemang Shaane, was also applauded for ten years of service to Océ South Africa in absentia. In his speeches, Clark thanked the award recipients for their on-going dedication and loyalty towards the company and added that the continuous development and advancement of services could not have been obtained without their commitment and experience. He said it was a great honour to be presenting dedicated team members with these certificates and gifts for their long service. Scott, who had received a long service award after 20 years with the company, started his career journey with Minolta South Africa (now Konica Minolta South Africa) in 1993, where he was trained for six months on the Minolta products in preparation for his role as service technician. In July 2003 he moved away from Konica Minolta South Africa to join the newly formed Bidvest division, Océ South Africa. In July 2012 he was promoted to technical supervisor. “I am very fortunate to be part of the wonderful Océ South Africa family. The management team and my colleagues makes it worthwhile to get up, even in the rain and cold, go to work, and see all the smiling faces around you. To everyone at Océ South Africa, you are the greatest,” he said. 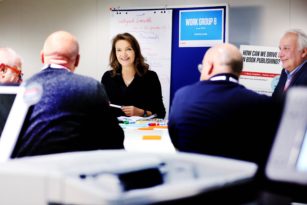