QR codes have been met with mixed reactions, from the delight at the success of QR-based campaigns to the total dismissal as an ineffective fad. There are few middle-of-the-road options.

QR Codes have become quite familiar but very few people know what they are and how they function. A lot has been written about the reasons for QR Codes failing, but what are they? The QR or Quick Response code was written by Toyota in 1994 as a means of tracking vehicle parts. They are small squares filled with data. They are two-dimensional and are designed in a matrix style. They were originally thought of as brilliant but the excitement waned. The concept is brilliant, scanning the QR code with your smartphone leads you to something of great interest.

Part of the failing of QR codes is the fact that people dislike them. This is attributed to lack of creativity, the technology required to access them and understanding what market the code wants to reach.

QR codes have made an impact in certain areas and some very clever campaigns have been designed and these have achieved some fair degree of success. Campaigns such as the Gillette Razor campaign and the Victoria’s Secret campaign, (both available on the internet) are just two examples which attracted huge attention. Maybe due to the sex appeal aspect.

Other campaigns have failed dismally. One of the main criticisms is that QR codes really lead to a call to action. This means that there is no real incentive for people to access the code other than idle curiosity. And when the viewer does visit the selected material there is very little pay-off anyway.

In some cases the response to QR codes is equally positive and negative. The MacDonald’s campaign was found to be novel and informative but at the same time it had drawbacks in that the information provided could only be accessed once a purchase had been made. Once the first purchase had been made, consumers would not access it a second time.

Then there is the situation where the people using the QR code as part of a communications or marketing campaign completely missed the plot. Look up WTF QR Codes and have a laugh.

In Part Two Nicolas looks at alternatives to QR codes, past and present, some that have failed miserably and others which are a real possibility.

One of the early precursors to QR Codes was the use of barcodes. These were fine in the POS environment but in the business or home environment it was far from ideal. A barcode reader was required and there was not much demand for this. One of these readers was called the Cue Cat which was bigger than your standard USB mouse and was slower to use than it was to type in the URL address on the average browser. Not surprisingly, it did not take off.

Another failure was the DigiMarc MediaBridge. This made use of a digital camera where the designated image was photographed, the image was then uploaded and the software then run. This launched the Altoids website and only then could the required content or information be viewed. Needless to say, this did not last long.

An alternative to QR codes which does have potential is Near Field Communication. This enables short range communication between compatible devices. It requires a transmitting device and a receiving device, or multiples of each. Devices can be either passive or active. Passive devices do not require a power source and can be as innocuous as a label or a tag. Active devices can both send and receive data and can communicate with each other as well as with passive devices. This has been used quite successfully in the local market as well.

Another alternative is Clickable Paper from Ricoh. This is a very simple system whereby an image, any image can become the reference point for a mobile app on a mobile device to access digital information whether a website, YouTube video, LinkedIn profile, Facebook page or twitter link etc to be accessed by the simple click of the camera. It is simple, cheap and easy to use.

Other options include SMS Short Codes, Augmented Reality and Mobile Apps. Short Codes use five numbers to access the required website. Augmented reality requires an App to be downloaded, as do mobile apps but they are both generally fairly easy to use.

Whether you like QR Codes or not they will be around for a while, but serious alternatives are on the way.

Nicolas closed off his article talking about a new concept called MisTable he describes this as follows:

I leave it up to the expert to give a full description. Zak Sokol, in ‘MisTable Lets You Manipulate Floating Projections Made Of Mist’, describes it thus: ‘The table top system developed by Bristol Interaction and Graphics combines a flat surface with floating screens made of mist which are both see-through and can be hand-manipulated. In other words, you can manoeuver drifting projections as if they were actually tangible (and filled with helium). The project invites users to engage in a variety of novel interactions such as ‘passing’3D projections to other people sitting at the MisTable, as well as moving and turning 2D and 3D images as if they were model toys on a rotating stand. The system also allows parties to see multiple mist projections at once.

Created by Diego Martinez Plasencia, Edward Joyce, and Sriram Subramanian, MisTable integrates a Kinect, Fourier Transform Infrared Spectroscopy (FTIR) table top (typically used to visualise an infrared spectrum of gas, or in this case, vapour), a Leap controller, fog machines, and projectors to bring this next-gen interface to life. This invention could be a game-changer for the future of public presentations, 3D-modelling, and (possibly) a unit of time cops led by Tom Cruise that prevents crime before it happens.’

So, while some of you may lament the (possible) passing of QR Codes, you have to admit that the future of communication looks very, very bright. It’s so bright I’m off to find my Shades……………! 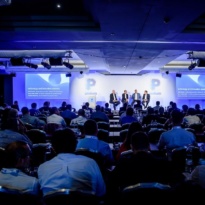 Heidelberg at the Hunkeler Innovation Days 2015 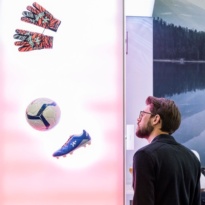