Our latest research into the printer market shows that print vendors are wrapping software solutions around increasingly commoditised base hardware products to increase customer value. It helps SMMEs, large enterprises, commercial printers, print service providers (PSP) and others be more efficient and add greater value to their own customers.

We also see that vendor R&D into primary markets is continuing but they’ve extended their R&D nets to catch adjacent markets through the development of their software solutions.  The strategy is generally paying dividends. Production device unit sales are up for the third quarter in Southern Africa, rising from 176 units the same time last year to 237 this year.

Generally, though, the increase in third-quarter unit sales over last year follows a cyclical pattern that repeats every two years. In 2014, 2016 and 2018 unit sales dipped to between 161 and 176 while during the intermittent years, 2015, 2017 and now 2019, sales increase to between 204 and 238.  Overall annual unit sales look to remain fairly steady. Since 2014 the numbers have fluctuated between 695 and topped 947 for a bumper year last year. Around 800 units a year is a reasonable average and that’s more or less what we see the market supporting this year, too.

We also expect to see full-year digital colour press sales remain flat at around 110 units. The direct-to-garment (DTG) market has been getting a lot more traction with the media this year and it’s mirrored in the unit sales. We expect a significant increase in unit sales in this sector year-on-year, rising from 28 in 2018 to 76 in 2019.

One of the major challenges for the vendors and the printers is the sales approach. The industry continues to use the traditional broadcast approach and the narrow-cast sales visit. Vendor salespeople routinely focus on their specific solutions rather than casting their net wider to include the base unit plus value-adding capabilities of the extended software solutions. It’s understandable since the newer devices are more capable and therefore more complex. But it suffers the myopia that leads to margin wars rather than extending the vision of providing value that grows revenues at a time when the South African economy is seen by many to be on the ropes and customers are trying to squeeze returns on their investments. There is still opportunity, particularly in solutions that break from the traditional mould, but much of it goes untapped taking some innovative European deployments as an indicator.

There can be no doubt this is a major challenge for many vendors across the region. Those that rise to it will undoubtedly reap the substantial rewards made possible by cross-selling opportunities and the resultant uptick in customer satisfaction.  In the copier/MFP market we see that it follows cyclical sales. From 2007 annual unit sales steadily rose from nearly 130 000 to 225 000 by 2015 at which point began a gradual decline. Numbers have continued a steady downward trend that we believe may hit just over 154 000 unit sales this year.

The period of increasing unit sales from 2007 to 2015 was also characterised by a simultaneous ramping up of the capabilities of copier/MFPs and their enabling technologies. Networks are more advanced now than they were in the early 2000s when MFPs began to emerge en masse, now offering rapid and easy connectivity to a whole new range of devices. Figuring out how best to integrate the copy, print, scan and fax functionality of what were formerly individual hardware units has long ago been refined.

It is really the integration of these devices into the enterprise business systems in ways that support digitalisation that greatly enhances their usefulness today. The focus has therefore rightly shifted to the deployment of software that unites the physical documents that are the staple of these machines with the digital world of workflows, processes, analytics, reporting, security and operational events powering advanced new businesses.
Article by Chris de Beer, Africa regional manager, infoSource

Packaging design What to watch for in 2019 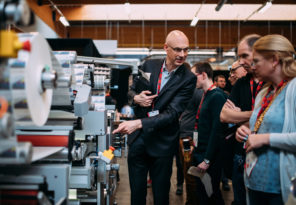